An Actuarial Perspective on COVID-19

With COVID-19, many employers are dealing with a variety of issues that few ever anticipated. While some employers are now managing work-at-home staffs, others have been forced to furlough or release employees until the world can again move beyond social distancing.

Rightfully, employers are concerned about the impact of the virus on their employees and the financial stability of their benefit plans.

While early reports, and some current reports, show case fatality rates of 3 or 4 percent, those numbers must be tempered. In most countries the incidence rate is underreported due to limited testing.

South Korea has more effectively controlled the spread of the virus by initially conducting much broader testing. However, South Korea has tested just less than 1 percent of its population. Although COVID-19 testing still is not widely available in the U.S., the country recently has seen expanded testing and has tested almost 2 million people. About 1 percent of the U.S. population is 3.3 million people.

It has been reported that up to 80 or 85 percent of those infected are asymptomatic or show mild symptoms. As such, many of these cases can go unreported.

Who is at greatest risk?

From the employer’s perspective, those at greatest risk are those of any age with comorbidities that compromise their immune system (asthma, HIV, some types of cancers, etc.) and those aged 65 or older with other contributing conditions.

Those 65 and older generally are retired, or if working, are reliant on Medicare for their healthcare coverage and are not part of the employer plan. The hospitalization rate of these individuals is five to six times higher than people ages 18-49.

For those in the working population, the rate of hospitalization for COVID-19 for those ages 50-64 is still three times that of those ages 18-49.

What will the impact be on the Employer Health Plan?

Longer-term cost increases (once social distancing ends and life returns to a recognizable level of normalcy): 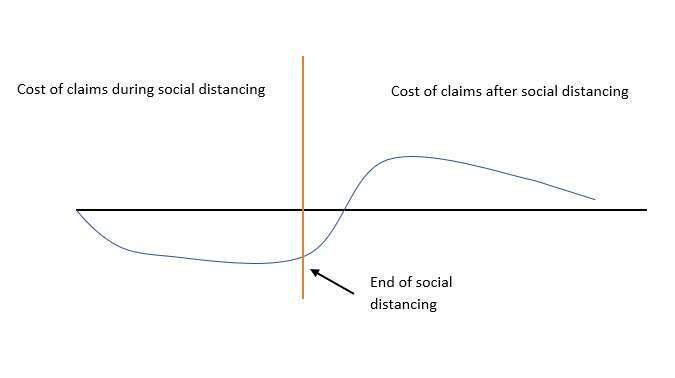 Cautionary note: Employers experiencing claim cost reductions need to recognize them not as permanent reductions, but as expenses that have been delayed.  As such, they should strengthen their reserves with the anticipation that the expenses likely will be incurred down the road.

What will the impact be on plan renewal?

Obviously, the answer will be different for every group, based on individual group experience. The longer the period of social distancing, the longer the “regular” claims level will be suppressed. While the costs may be lower for the employer in the short term, they also may be lower for reinsurers. Elective procedures, which can lead to costly complications, should be reduced.

In the nearer term, a treatment may become available to reduce the severity of the illness and, in turn, associated costs. But until an effective vaccine is produced in significant volume, the risk of a “second wave” or “third wave” will persist, which could impact reinsurer rates. Clearly, this year’s renewals will involve many more factors to be reviewed than in the past.