Unlocking the Universe of Specialty Drugs and Therapies 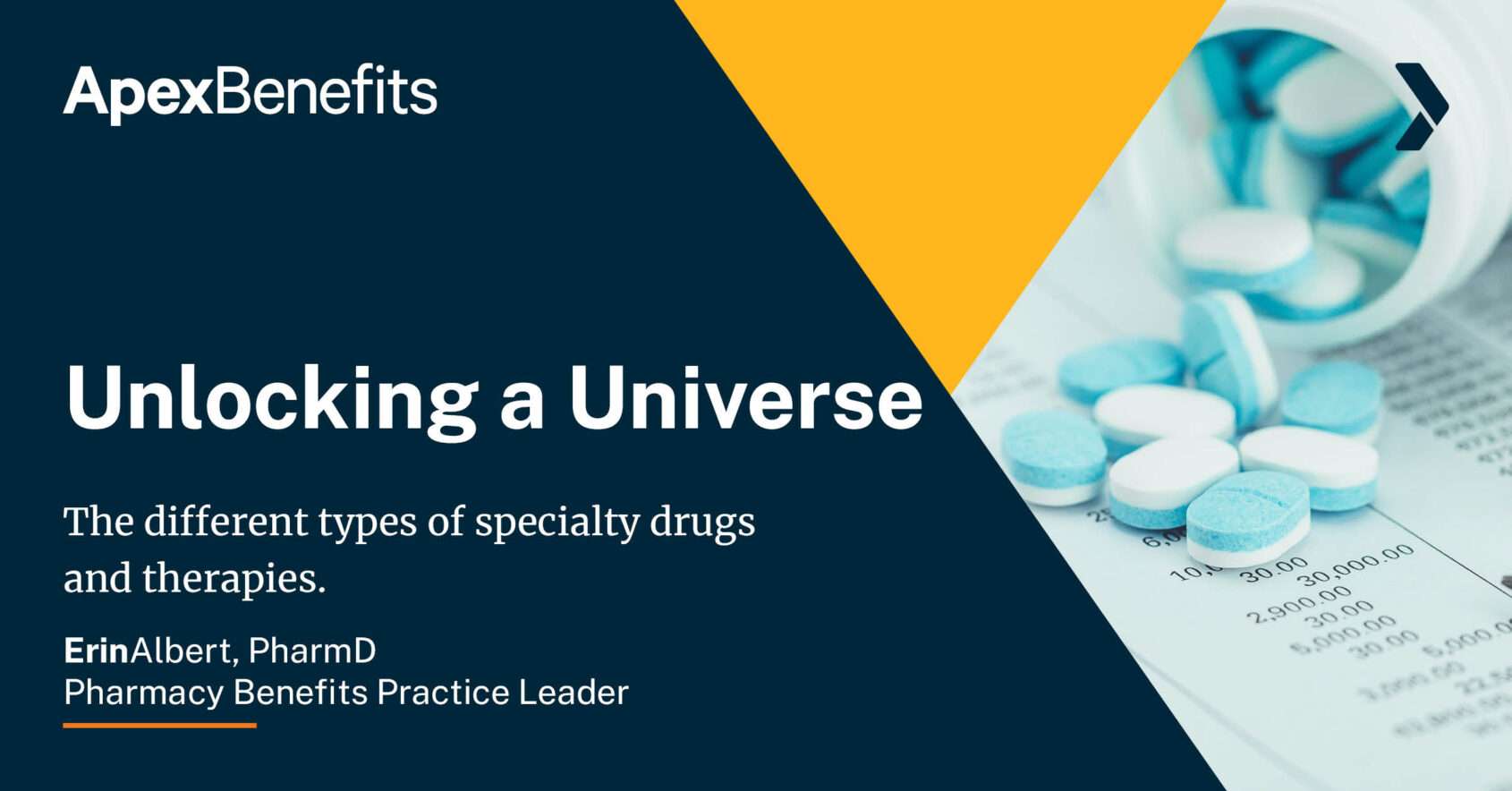 Just like the universe itself, the universe of pharmaceuticals is expanding, and has become extremely complex. Beyond the traditional pharmaceutical compounds, typically called “small molecule” drugs of yore, specialty drugs have arrived on the scene and are increasing pharmacy benefit budgets.

But it’s a lot more complicated that just lumping all “Specialty Drugs” together. Further complicating matters, everyone on planet Earth seems to have a different definition of what a Specialty Drug is and is not. Let’s break this term down, along with subsets of Specialty Drugs and their key terms. 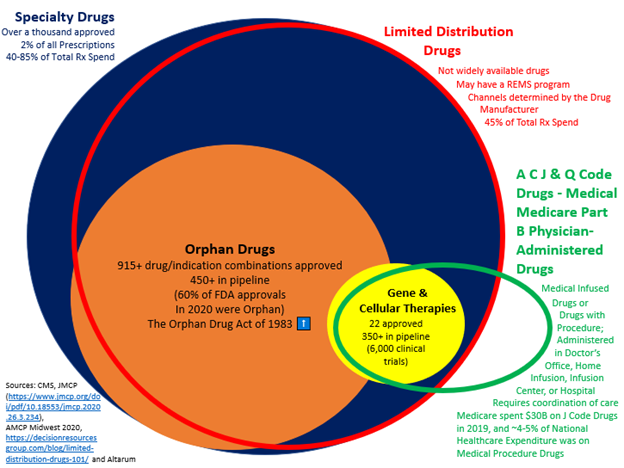 Note: Overlaps in the graphic above are approximate and not illustrative of actual overlaps.

What is a Specialty Drug?

“High Cost” could also be opened to interpretation. The American Pharmacists Association uses general benchmarks of $10,000 – $100,000 or more per patient per year treatment costs.

If we use this definition to start from, we can explore other solar systems of the Specialty Drug universe. Read on for the key terms as illustrated in the map above.

Orphan Drugs – Orphan drugs are a subset of Specialty Drugs (although not all orphan drugs or uses of drugs are orphan. Orphan drugs are approved by the Food & Drug Administration to cover Orphan Diseases. In the US, an “Orphan Disease” has 200,000 or fewer patients suffering from the disease to be considered a rare disease. Orphan drugs were not popular in the 1960s and 1970s for the pharmaceutical manufacturers to bring to market, simply because there were not enough patients to make back the money invested in clinical development for a rare disease.

Congress responded by passing The Orphan Drug Act of 1983. This Act gave pharmaceutical manufacturers many incentives to bring rare disease drugs and therapies to market – like patent extensions, tax breaks, even golden tickets – to name a few. Since then, there have been around 730 drugs approved to treat some rare or orphan diseases, with thousands of uses approved by FDA. The cost of Orphan Drugs has significantly increased as well in the past several decades, to an average cost per patient of $170,000 per year. Sixty percent of drugs approved by FDA in 2020 were for orphan diseases.

Examples of Orphan Diseases include Alice in Wonderland Syndrome (AIWS), hemophilia A, and spindle cell hemangioma.

Gene and Cellular Therapies – are the newest category to the drug and therapeutic FDA approval scene. Due to the mapping of the human genome, now more than 6,000 clinical trials are being conducted to see if altered genes can literally treat or even cure diseases like blindness, hemophilia, sickle cell anemia, and cancer.

Twenty-two cellular and gene therapies have been approved by the FDA, and over 350 other gene therapies are being tested in 6,000 clinical trials as of November 2020. While these are excited and potentially curative, in some instances, the cost of these therapies is astronomical. They range in price from tens of thousands of dollars per course of treatment to over $3 million per treatment, and the new potential gene therapies coming to market are speculated to cost even more.

An example gene therapy is voretigene neparvovec-rzyl, a gene therapy to treat children and adult patients with an inherited form of vision loss that may result in blindness.

Limited Distribution Drugs – Limited Distribution Drugs are not a class of specialty drugs, per se; they are a method by which pharmaceutical manufacturers may limit several specialty drugs. This term, too, has different definitions, but in general, limited distribution drugs are drugs and/or therapies that are limited to only a few pharmacies or drug wholesalers to distribute the therapy to other pharmacies or patients, because the drugs either require special monitoring, administration, shipping, and/or clinical expertise.

A limited distribution drug is typically managed by a Specialty Pharmacy. Specialty pharmacies are accredited to handle Specialty Drugs and all their complexities. Sometimes, a limited distribution drug also may have a REMS or Risk Evaluation Mitigation Strategy around it, that requires the Specialty Pharmacy to monitor the patient’s and/or provider’s compliance or adherence to the strategy. When drugs are approved under a REMS program, there are serious safety concerns with a drug and decreasing risk is imperative for the patient taking the therapy.

An example of a REMS program would be for a patient of childbearing age taking certain acne drugs that could cause birth defects in newborn children. A REMS program in this instance might require the patient to be on contraception while taking the acne drug.

A, C, J & Q Code Drugs – Medicare Part B Physician Administered Drugs – Of all the drugs inside the universe of specialty drugs, the Medicare Part B Physician Administered Drugs (or “A, C, J or Q Code” therapies) may be the most difficult to parse out, simply because they’re rarely in the pharmacy benefits; they’re often billed in the medical benefits.

These drugs came out of the Medicare Modernization Act of 2003, and you can learn more about how they are billed here. Because medical claims are billed and paid with a huge lag, unlike pharmacy claims, there was a need to set up a different payment and reimbursement system for J code drugs. J code drugs are billed in medical because they are either associated with a procedure by a physician or prescriber, or they are infused or injected by a physician or prescriber (they are not orally administered).

Often, these drugs can be infused, injected, or coupled with a procedure in the following setting: outpatient hospital, home infusion, infusion center, or physician’s office (every therapy is different). Some J code drugs are used for inpatient hospital stays as well, like surgeries. Clotting factor for hemophiliacs may also be infused at a hemophilia treatment center. Radiopharmaceuticals can be used for diagnostics or treatment of cancers as another example.

Many J code drugs that are used in an outpatient setting are specialty drugs; some are also limited distribution drugs. Nearly all gene and cellular therapies have J codes, and many also treat orphan diseases.

So What? Why Do We Care?

Not all the terms of the Specialty Drug Universe overlap perfectly. It’s complicated. But hopefully this map of the specialty drug universe helps break down what is often the largest chunk of pharmacy plan spend over the course of a year, and an area of pharmacy that is yet to fully expand. This area of the pharmacy universe is also exploding and will continue to expand in the next 5-10 years.

This is a critical area of healthcare benefits to understand, as it is the highest percentage spend of many drug plans, and only getting bigger and more expensive over time. If this article leaves you wanting to know more, please contact us. We’re here at Team Apex to map out this complex area of healthcare benefits for our clients and excited to chart the course in the years ahead.