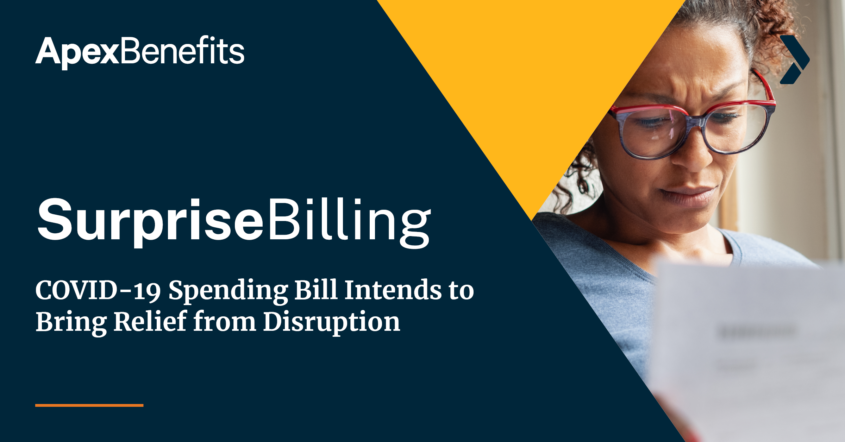 Because the latest stimulus package was coupled with what has become known in recent times as the “annual spending bill” or “omnibus,” Apex General Counsel and Vice President of External Affairs Todd Rokita says that “Congress took the momentous opportunity to amend many policy riders into this record-breaking, mammoth package.”

“It was mostly an effort to attract votes for something that individual members would not have otherwise touched in terms of the spending amounts,” he said. “While one can certainly denounce the wisdom of such budgeting practices or the appropriateness of many of the policies themselves, this process ended up providing some much-needed reform, legal support and guidance to ‘Surprise Billing’.”

What is Surprise Billing?

Surprise billing can be very disruptive to the satisfaction and financial health of a plan sponsor (employer) and its plan members (employees and their families). This disruption arises from individuals unknowingly accessing care through providers out of their contracted network arrangement.

Here is an example of this issue:

The dilemma for the health plan has been how to reimburse the non-contracted service provider, as illustrated in the above example provided by Apex Chief Innovation Officer Stan Jackson, CPBS.

This issue has historically created a great deal of friction for health plan administrators, sponsors, insurers, physicians and other service and care providers.

“Payment determinations are made based upon ‘usual and customary’ reimbursements,” Jackson stated. “This looks at the prevailing reimbursement rate on average in the market where the service was provided.”

This gap between the plan’s reimbursement and the provider’s billed rate creates an additional – “surprise” – expense for the member. The member also receives no credit for the additional amount being applied toward their deductible or maximum-out-of-pocket expenses.

“The recently passed legislation provides a remedy to this issue with a process for resolution of these balance billed amounts,” said Jackson.

While additional guidance will be developed by secretaries of Health and Human Services, Labor, and Treasury, the legislation proposes the following:

“While the final rules and regulations will be cast in the future, creating this process through legislation is a great start in order to solve this issue for all parties,” said Jackson.

Rokita added, “But be aware: the devil is always in the details.  Legislation should be graded on how detailed it is. That’s because the less detailed it is, the more the courts give deference to government agencies to interpret the legislators’ intent through its own rules and regulations.

“From a free society governance standpoint, this isn’t a good thing since bureaucrats aren’t elected by anyone,” he continued. “HHS, for example, has an annual budget of more than $1 Trillion, spending $2 billion per day. It may be the largest organization on earth. That’s a lot of bureaucrats in a place that really is too big to be policed by Congress, the President, or anyone else.”

Rokita adds that the language finalized in this bill was not thought up at the last minute. Congressman Dr.  Larry Bucshon (R- IN), who is a leader on one of the committees of jurisdiction, and others, have been working on this language for over a year.

“I am pleased that multiple priorities that I have been working on throughout the 116th Congress will now be passed into law as part of this legislation. Th[is] include[s] a solution that addresses Surprise Medical Billing so that patients are protected – while also ensuring that the solution is fair for both providers and health plans…,” said Dr. Bucshon, a thoracic heart surgeon before entering the U.S. Congress in 2010.

We will share more information about surprise billing as it is available. If you have any questions, an Apex benefits strategist would be happy to speak with you. Please reach out to us at info@apexbg.com.