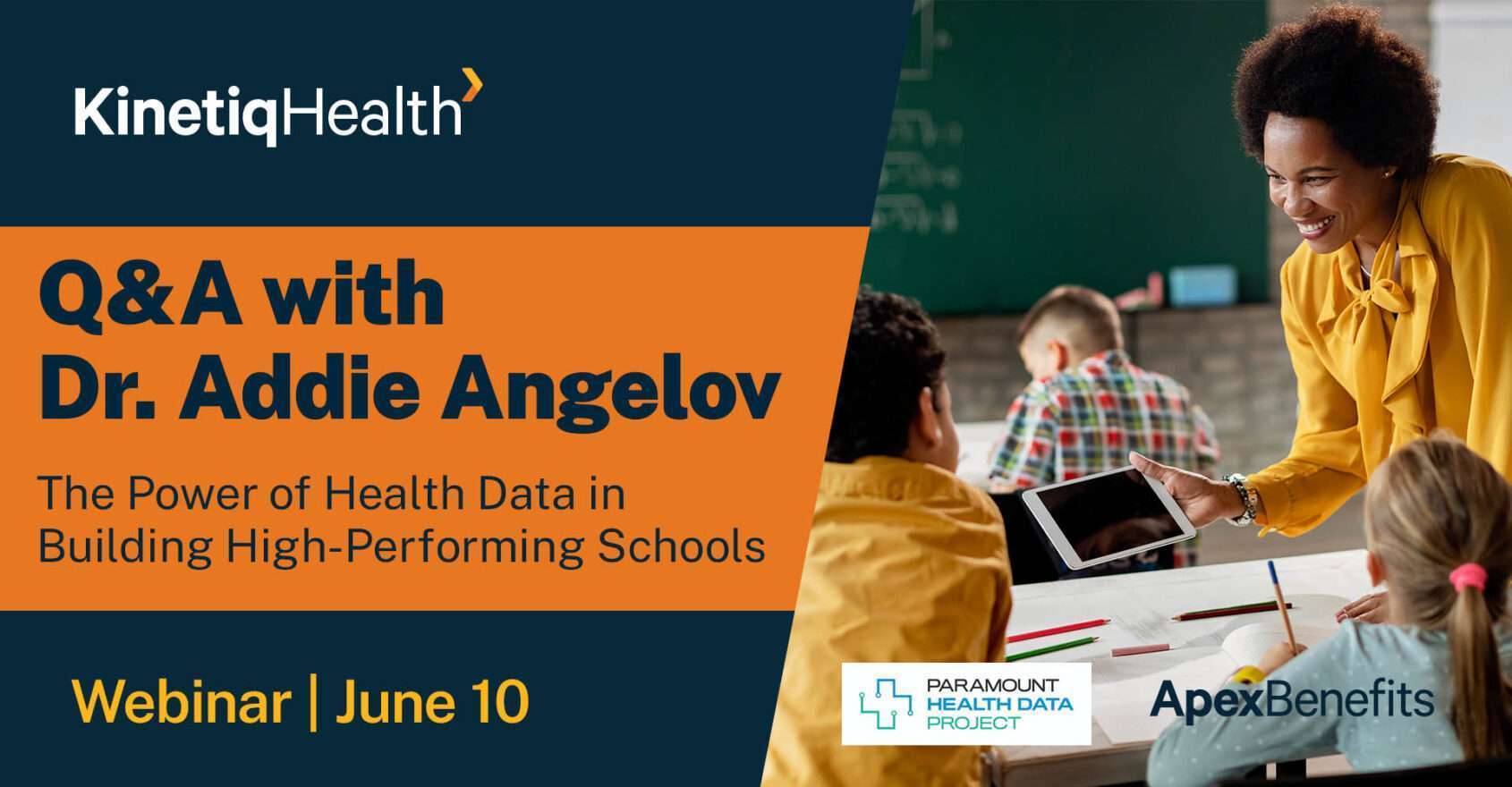 Dr. Addie Angelov has dedicated her life to education and how to better the educational experience for students.

As a co-founder for Paramount Health Data Project (PHDP), the goal is exactly that. She analyzes the health data of students in Indiana’s K-12 schools and correlates data collected from school nurse visits to predict academic achievement.

She’s partnering with Apex Benefits for a webinar titled, “The Power of Health Data in Building High-Performing Schools,” on Thursday, June 10. She’ll join Director of Kinetiq Health Sarah Michaels, RN, and Empact HR Consultant Brooke Salazar, JD, to discuss the importance of this health data and how schools can use it to determine how to support students coming back from COVID learning loss.

Where did this idea to look for this health data originate from?

My background is special education and I do a lot of work with schools around special education. I was working with Paramount Schools of Excellence (PSOE), a school in Indianapolis, and they were seeing a lot of things with some of their kids. We were really just trying to figure out, you know, what was going on.

PSOE works with kids, who’ve experienced trauma and malnutrition, all of the things that poverty brings to the table. I was doing work with them and we thought we were seeing a lot of the manifestations of lead poisoning. So, we went to the county health department and said, “Hey, as a school, we give you a ton of data, but we never see anything back from that.” So, we asked, “Can we pull our kids’ data for this group of kindergartners?” We got the data about nine months later, and it was three years in the rears. That was super helpful information about the fourth graders, but it could tell us nothing about the kindergarteners. There was nothing in real time.

When that happened it was like OK but we have the school nurse over here who’s collecting all this data and we can use it for kids as part of the special education-enabling process. Like, that’s a 100% totally allowable and recommended as the best practice, and so we thought, well, what if we just pull that data? So we started looking at it to see if we could see anything new about these kids that we didn’t know before.

Were there any hurdles getting this data?

I should say the school leader is really innovative and an amazing problem solver. We had to be willing to navigate HIPAA to do this, especially if we weren’t going to intentionally label kids. So, we were looking for some answers that were outside of the box or at least evidence, or reliable evidence, that could help us make better choices and serve that group better.

What did you do with this data?

I think we started systemically collecting data for this purpose in 2013. We have pretty impressive data sets that we use because we started that way. It really emerged there. There are four of us that founded PHDP. Two of us are researchers that have always worked in schools, and two of us were school leaders who are just trying to figure out how do we serve kids better.

How can we find those answers? That’s really where it started. It’s been about eight years since we started that conversation.

You really kind of have to understand the realities of what research in schools can do and what you can actually do with numbers and just understanding vulnerable populations, understanding, what you can, and can’t do. What we have found is that IDEA – the Individuals Disabilities Education Act – was the perfect bridge between HIPAA and FERPA because both groups, both policies really, mirror each other in a lot of ways. This is the group of kids that really allowed us to make that jump.

We have created a variable called the Academic Cliff, and what the Academic Cliff is, is the number of visits to a school nurse – for anything or nothing – where you start seeing a statistical significant difference in academic achievement scores in English and math.

I would say the first few years we were chasing a number. Like we really thought there’s a number of visits that shows us. And at that point, once you know that number, then you can start intervening as a school earlier.  The other approach that we’ve taken, which I think is different than most folks, is that we don’t assume that we can control anything outside of the school day. We decided the only thing we can control is school time and the daytime that they have with us.

How as the COVID-19 pandemic influenced your work?

We have a couple of schools who have found that out during COVID that they are responsible for this data, this is your data. It was collected by either your employee or your contracted vendor, and it’s about your students. It’s 100% under your control and part of what you need to be thinking about.

I also think one of the things that we have learned during COVID is it’s also important from an HR perspective, especially if you’re an elementary school. We were systemically collecting data across almost a million kids in Indiana when COVID was going on. We started seeing crazy things, and I had one school leader that was like, “I don’t know what’s going on, but I’m going to have to turn a classroom into an infirmary.” And by February he closed three classrooms because they had so many kids coming down with what we now know where the pediatric signs of COVID.

We didn’t know really what it was. We’re now able to go back and look at that data to give schools really great insights. But if you’re in an elementary school right now, when will we see a pediatric version of the COVID vaccine? The reality is elementary teachers, elementary principals, elementary staff are literally walking into a situation where 90% of the humans they interact with aren’t even eligible to be vaccinated yet.

What does PHDP do for schools?

We work with your IT department to do a data draw from your database. We give you your health data back in a way that makes sense for your teachers and to include your nurses as an academic partner for all kids, not just students with IEPs.

We analyze your data and give it back to schools as a report card that translates their data into something that MTSS teams or intervention teams can use to be more proactive in providing academic support. As an example, say you have kids that come down to the nurse more than two times for ear, nose and throat, here’s what they’re predicted on math and ELA. Then your team can take that information and decide, based on a piece of valid and reliable data when they should start giving more support.

By like the fourth time they come see the school nurse, you don’t have to give them a label, just put them in the math report because that’s what your data tells us your kids are going to need.

We originally thought there’s a number, but what we figured out is we’re right. There is a number, but it’s different for everybody. And it’s different based on the health conditions in their area. Just like ILEARN, IREAD, and NWEA, every school will have a different Academic Cliff, but once you know it you can start intervening more strategically and more quickly. We have found up to 8 weeks faster without ever discussing a special education label. This is huge for combating COVID learning loss and disproportionality.

What is your hope is the biggest takeaway from this webinar?

I think that you’ve got to look for the silver lining, right?

What I hope comes out of this is one, I think specifically for this audience, is that schools in Indiana know that they have the best case scenario of any state in the country right now to come back from COVID for two reasons. One, PHDP is the first in the country to leverage health data in a way that impacts academic achievement that is recognized under federal guidelines and approved by the Indiana Department of Education as an ESSA evidence based best practice.

Indiana schools can now leverage title funds to pay for health services in your school if you engage with PHDP for data analytics. Indiana is the only state in the country that has that ability right now. I feel like we kicked that door down for Indiana schools so that they can run right through it. Schools in Indiana have access to the most fiscal flexibility to get academics and health on track in their buildings than anyone in the country.

Second, we were able to work at the state house level to open the door around Medicaid funding for kids who are labeled 504. Currently, 22 states other states, they’ve done this and it saves schools millions in service provision. Historically Indiana schools have been able to bill for students with IEPs, but not 504. Most schools across Indiana are providing these services out of general funds or requesting public referendum dollars to cover it. Indiana schools now have a choice. While they’ve always been able to do it for kids with IEPs, now they can do it for kids getting 504 services. This means schools can now bill .66 on the $1 for services they have been paying full price for. This will be a game changing amount of savings for some Indiana schools.

We have $2 billion coming in from the federal government that they never had access to. Their title funds are officially doubled. Their special education funds are officially doubled. Two sets of funds that they’ve always gotten that have been their biggest pots of money are twice as big for this fall. And we opened up two completely new lines of funding for both healthcare and education that they’ve never had access to before or the flexibility to use in new ways. So, what I would say is not only do you have access to something that is state and federally approved, but you have access to more money and more fiscal flexibility than you have ever had. The Indiana educational landscape is the most fertile ground in the country for getting this right and we at PHDP feel great about our role in helping make that happen. We would love to work with as many schools in Indiana as possible to help them make the most out of their ESSER years and support students coming back from COVID learning loss.

If you’re interested in learning more about the power of health data, visit https://apexbg.com/health-data-and-schools/ to register!