[In the News] Rokita Opinion on Drug Price Transparency: Employers Must Lead Change 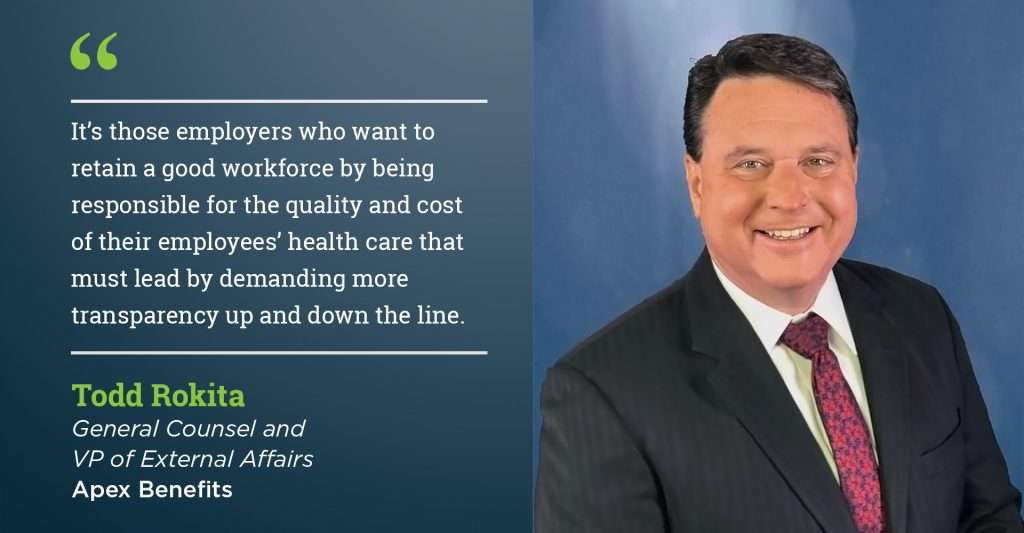 The April 5, 2019 edition of the Indianapolis Business Journal featured an opinion piece by Apex Benefits General Counsel and VP of External Affairs Todd Rokita. The op-ed, “Responsible parties must own their role in sky-high drug prices,” asserts that everyone along the prescription medication supply chain — including manufacturers, PBMs and even employers — is complicit in allowing drug pricing to continue to soar and become even more complex.

He says it’s up to employers to drive change. “It’s those employers who want to retain a good workforce by being responsible for the quality and cost of their employees’ health care,” he says, “that must lead by demanding more transparency up and down the line.”

Read more below and as published on IBJ.com.

Responsible parties must own their role in sky-high drug prices

Here is the scene-setter: Numerous self-interested parties involved in prescription-drug distribution and reimbursement are increasingly pointing fingers at one another for the high cost of medications. But while manufacturers, pharmacy benefit managers and health insurance monopolies are all redirecting blame away from themselves, the reality is, they’re all complicit.

It’s time to call out these industry players who place the blame for the increasing cost of medicines on others while ignoring their own exorbitant profit levels that free-market pricing would never tolerate.

In his State of the Union Address, President Trump did just that. And recently, Alex Azar, the nation’s Health and Human Services secretary, proposed “safe-harbor” reform rules to better pass drug-manufacturer rebates through to Medicare consumers. Then, Indiana Sen. Mike Braun filed legislation with similar ideas. These three are leading.

Between rounds of finger-pointing, though, the self-dealing industry players immediately claimed that these proposals won’t—by themselves—bring down prices. But it’s hard to imagine price increases as the result. And for those who understand the need for more transparency to bring down prices, at least one of the “shells” in the rebate shell game would be taken off the carnival table. The reforms also are likely to have a positive ripple effect on the employer-provided private-insurance market, the source of most prescriptions.

But really, it’s those employers who want to retain a good workforce by being responsible for the quality and cost of their employees’ health care that must lead by demanding more transparency up and down the line. There are several actions employers can take to lead the prescription-drug industry in the right direction.

It’s the cold, hard truth that there isn’t one simple solution for eradicating the complexities of the pharmacy benefits industry. But with price transparency comes positive transformation of the industry. So, real value for employers will be found if they are committed to educate themselves, disrupt the status quo, and fight for themselves and their employees ahead of their brokers, the PBMs, manufacturers and carriers. #