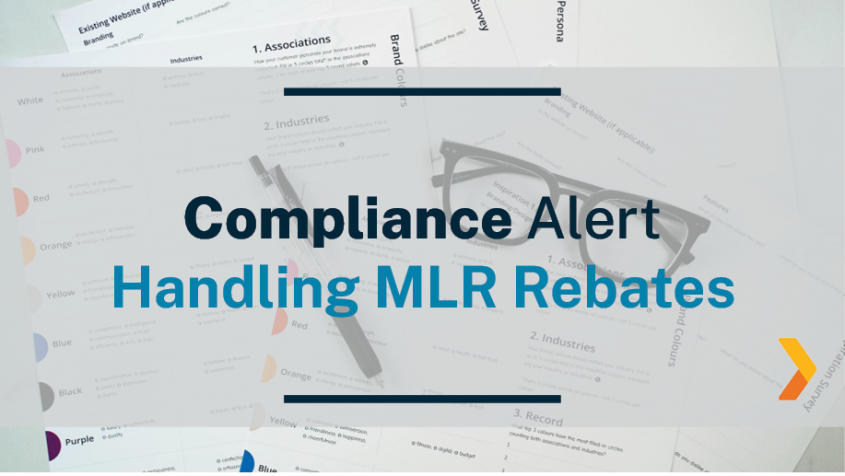 Issuers that do not meet these requirements must provide rebates to consumers. Rebates must be provided by September 30 following the end of the MLR reporting year. For the 2021 reporting year, issuers are required to pay rebates by Sept. 30, 2022.

Employers that expect to receive rebates should review the MLR rebate rules and decide how they will administer the rebates. For assistance with rebates, please contact your Apex Benefits representative.

An issuer that does not meet its MLR standard must provide a rebate to the policyholder, which is typically the employer that sponsors the plan in the group health plan context. For current enrollees, issuers may provide rebates in the form of:

Also, to avoid having to pay a rebate, an issuer may institute a “premium holiday” during an MLR reporting year if it finds that its MLR is lower than the required percentage. According to HHS, an issuer may use a premium holiday only if it is permissible under state law. Also, any issuers using premium holidays must meet certain other requirements, such as providing the holiday in a nondiscriminatory manner and refunding premium overpayments.

Most, but not all, group health plans are governed by ERISA. Employers with ERISA plans should not assume that they can simply retain an MLR rebate.

Is the Rebate a Plan Asset?

According to TR 2011-4, in the absence of specific plan or policy language addressing these types of distributions, whether the rebate will constitute a plan asset depends, in part, on the identity of the policyholder and the source of premium payments.

In any case, under the DOL’s guidance, employers are generally prohibited from retaining a rebate amount greater than the total amount of premiums and other plan expenses paid by the employer.

How Should the Rebate be Used?

Once an employer determines that all or a portion of an MLR rebate is a plan asset, it must decide how to use the rebate for the exclusive benefit of the plan’s participants and beneficiaries. DOL TR 2011-4 identifies the following methods for applying the rebates:

If a plan provides benefits under multiple policies, the employer must be careful to allocate the rebate for a particular policy only to the participants who were covered by that policy. According to the DOL, using a rebate generated by one plan to benefit another plan’s participants would be a breach of fiduciary duty.

Is there a Time Limit for Using Rebates?

To the extent a rebate qualifies as a plan asset, ERISA would generally require the amount to be held in trust. However, most group health plans receiving rebates do not maintain trusts because their premiums are paid from the employer’s general assets (including employee payroll deductions). In TR 2011-4, the DOL provides relief from the trust requirement for premium rebates that are used within three months of their receipt.

In addition, directing an issuer to apply the rebate toward future participant premium payments or toward benefit enhancements adopted by the plan sponsor would avoid the need for a trust and, in some circumstances, may be consistent with the employer’s fiduciary duties. Employers that decide to take this approach should coordinate with their insurance issuers to establish the process for handling rebates.

Group health plans maintained by non-federal government employers (for example, state and local governments) are not governed by ERISA’s fiduciary standards. HHS’ interim final regulations on the MLR rules provide that employers must use the portion of the rebate attributable to the amount of premium paid by employees to:

HHS’ final 2016 Notice of Benefit and Payment Parameters changed the MLR rules to require that participants of non-federal governmental or other group health plans not subject to ERISA receive the benefit of MLR rebates within three months of receipt of the rebate by their group policyholder, just as participants of group health plans subject to ERISA do.

HHS also addressed rebates for non-governmental group health plans that are not subject to ERISA, such as church plans. Under HHS final regulations, an issuer may make a rebate payment to the policyholder (typically, the employer sponsoring the plan) if it receives the policyholder’s written assurance that the rebate will be used for the benefit of current subscribers using one of the options described above for non-federal governmental plans. Without this written assurance, issuers must pay the rebate directly to employees covered under the policy during the MLR reporting year.

Also, HHS proposed requiring that participants in non-ERISA plans receive the benefit of the MLR rebate within three months of when the rebate is received by the plan sponsor. If a church plan is covered by ERISA, the standard rules for ERISA plan assets will apply.

The IRS issued a set of frequently asked questions (FAQs) addressing the tax treatment of MLR rebates. In general, the rebates’ tax consequences depend on whether employees paid their premiums on an after-tax or a pre-tax basis.

If premiums were paid by employees on an after-tax basis, the rebate will generally not be taxable income to employees and will not be subject to employment taxes. This tax treatment applies if the rebate is paid in cash or if it is applied to reduce current year premiums. However, if an employee deducted the premium payments on his or her prior year taxes, the rebate is taxable to the extent the employee received a tax benefit from the deduction.

If premiums were paid by employees on a pre-tax basis under a cafeteria plan, the rebate will generally be taxable income to employees in the current year and will be subject to employment taxes. This is the case whether the rebate is paid in cash or is applied to reduce current year premiums. A premium reduction in the current year will reduce the amount that an employee can contribute on a pre-tax basis. Thus, there is a corresponding increase in the employee’s taxable salary that is also wages subject to employment taxes.